Yo, I'll hug a girl like it don't mean nothin'
Then turn around and start huggin' her cousin
I don't love 'em, end of the f***in' discussion
Got 'em tucked between my wings like thanksgiving stuffing 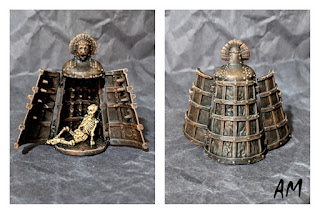 Forced into the chamber, the hapless victim screams in terror as the doors are slammed closed, impaling them on countless iron spikes.  A horrific fate for usurper, rebel, or heretic...

Despite the Iron Maiden's central place in everyone's imagination of what a medieval torture chamber would look like... there's no actual evidence that any such device was constructed or used prior to the modern era. The most well-known example, the Maiden of Nuremberg, is a replica of a 19th century construction.  Nevertheless, any "torture museum" tourist trap worth its salt can be expected to have one on display.

This particular example is from WizKids Deep Cuts, with the skeletal victim added by me.