They were not evil things of their kind. They were the men of another age and another order of being. ... Scientists to the last - what had they done that we would not have done in their place? God, what intelligence and persistence! What a facing of the incredible, just as those carven kinsmen and forbears had faced things only a little less incredible! Radiates, vegetables, monstrosities, star spawn - whatever they had been, they were men! 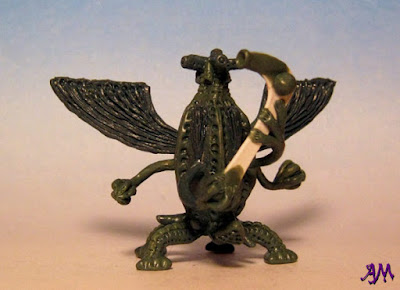 Unlike many of H. P. Lovecraft's horrors, the Elder Things were not supernatural or truly malicious in any way.  They were aliens who traveled to earth in the Cambrian era, founding a strange civilization and bio-engineering the dreaded Shoggoths as their servants.  Though hinted at in various eldritch volumes of the past, their existence was only truly discovered by Antarctic explorers from Miskatonic University in the 1930s, precipitating the loss of most of the expedition. 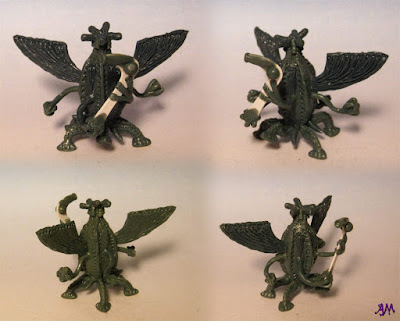 This strange creature from "At the Mountains of Madness" started out as an oval bead from my daughter's necklace kit.  I'd painted Lovecraft mythos figures before, but the Elder Things never caught my interest simply because ATMOM is, frankly, not a very accessible novel.  My sculpt isn't overly original, largely based on various Deviantart pieces as well as Lovecraft's oblique text description.  Most people's interpretations look something like these:


I imagined the tentacles, legs and wings to be boneless fluid-filled structures and sculpted them accordingly.  I don't think the "hands" and wings turned out particularly well, but overall I'm happy with it.  I gave it a tool or weapon (Laser gun?  Musical instrument?  Elder drain unblocker?) because they were supposed to be a highly advanced civilization, not just tentacle-waving animals.
Posted by Allison M. at 7/22/2015 09:58:00 pm 8 comments:

Like most of us, I like to keep up with what other painters are up to on their blogs.  And while I can appreciate the technical accomplishments of a well-painted army... well, usually it's the little things that make me say "Yes!  This hobby is awesome!"

This, at Menace Miniatures, is one of those things: 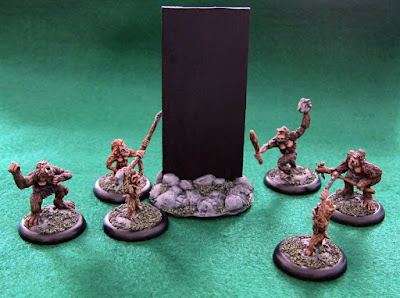 I'll admit I suggested the idea to redmenace, but wow.  What a great job.  This is a scene I've wanted to put together myself for ages, but I never got around to it.  Looking at it here, I can just imagine that scene from 2001...

Email ThisBlogThis!Share to TwitterShare to FacebookShare to Pinterest
Labels: 2001, apes, in other news

I finally completed my last few Prang models, here's the squad all together.

I had fun painting these froggy guys, each one is unique in many ways (weapons and armour are all a little different) but with a coherent painting style they tie together well as a group.  Their slightly different body types and facial structures give them a lot of character too; they remind me of the ensemble casts of many war films.

Incidentally, this is the first full squad I've done with the attached bases removed and scratchbuilt "indoor" bases added.  A fair bit of work even for these simple designs, but I like the results! 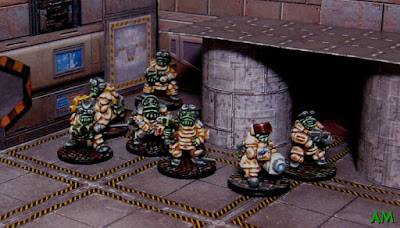 Not all problems can or should be solved by superior firepower, so in addition to the basic mechanical training all Prang troopers receive, mission teams usually include an experienced technologist.  Skilled in manipulating materials as common as steel or as exotic as scrith, as well as infiltrating automated systems, they protect their squad from threats ranging from a locked hatch to killer nanoswarms.