Just frigging around to unwind, after an evening spent painting... the new nursery. 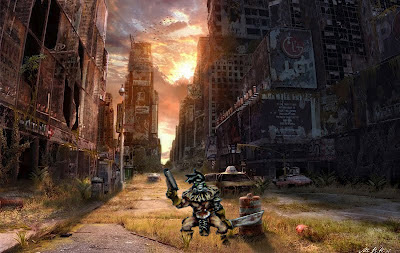 Raul warily surveys his surroundings, the ruins of a once-great city. 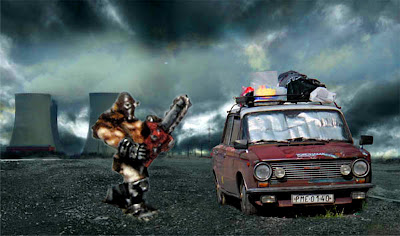 Tex, a little off his head from eating some spoiled Fancy Feast, attacks an abandoned car while hallucinating that it's a "mutant red buffalo".
Posted by Allison M. at 4/03/2012 11:16:00 pm No comments:

Email ThisBlogThis!Share to TwitterShare to FacebookShare to Pinterest
Labels: 15 mm, Photoshop, post-apocalyptic, Sci-fi, things i do late at night when the baby is asleep but my paints are packed away 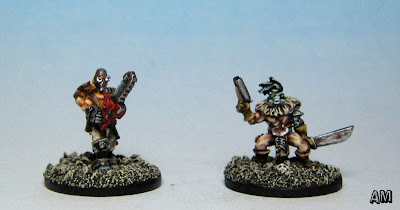 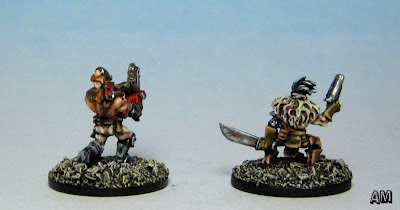 In a world ravaged by war, and/or environmental collapse, alien invasion, sub-prime mortgage crisis etc, only the cunning and brutal can survive. Scavenge for gas and canned food, and count your bullets... save one for yourself when your luck runs out.

Gas being so precious, Tex doesn't always use a chainsaw in battle... but does keep it ready for when a psychological edge is required.  Raul del Oso wears the pelt of a giant bear he encountered in the ruins of San Diego, supposedly killing the beast using only his knife. 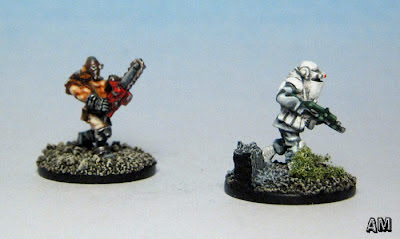