Jungle Bases, and a Third Doctor

Still working on these Huntarr...  The figures themselves are largely done but I'm trying to make some credible jungle/forest floor bases.  Not easy in 15mm!  I thought about sculpting them from greenstuff but in the end fell back on the old, reliable spice rack, in this case, oregano.  It's very hard to apply without seeing it stick up in an out-of-scale manner, and I always end up filling in gaps by fussily tweezering individual tiny flakes into place.

I'm having a bit of a creative block deciding what material (or rather, species) the chieftain's cape should be.  This is just a placeholder, I swear.  I really should have just sculpted some fur onto it before I painted him.  Too late now. 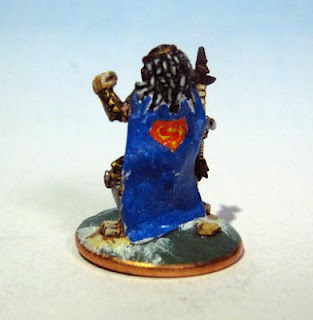 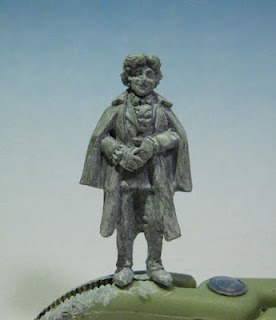 Meanwhile, to give my eyes a rest, I thought I'd hit a 28mm project for a change.  This is yet another Black Tree Miniatures Doctor Who figure: John Pertwee's flamboyant, ruffles-wearing Third Doctor.  He's flagantly violating Edna Mode's rule: "No capes!"
Posted by Allison M. at 8/29/2012 09:10:00 pm 5 comments:

Email ThisBlogThis!Share to TwitterShare to FacebookShare to Pinterest
Labels: 15 mm, Doctor Who, Sci-fi

My Huntarr seem a bit... metally so far, but I'm sure they'll come together in the end.  I'm trying for the same look as my previously painted Vacation Aliens (pictured).  Not, alas, aided at all by my rapidly expiring bottle of Brazen Brass.  And god help me if my Tin Bitz bites the dust.

I just came across this Star Wars mini blog via the Lead Adventures forum... "Scotty Speed" apparently has about six hundred SW miniatures, some WEG, some custom conversions and sculpts of his own!  He's a really good painter too:

In touch with the ground
I'm on the hunt, I'm after you
Scent and a sound
I'm lost and I'm found
And I'm hungry like the wolf

So I finally acquired up some of Khurasan's "Huntarr".  These are technically 15mm scale but have been bulked up over their "Vacation Alien" cousins to be rather more intimidating!  There are a couple of sets available - typical lightly armed hunters, heavier rifle-toting shock troops and a chieftain.  I'll probably just paint these few guys up due to time constraints. 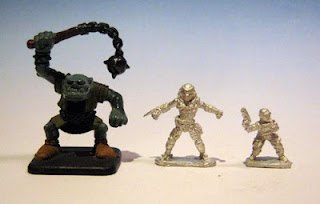 The obligatory size comparison, since pics of these figures are few and far between out there...