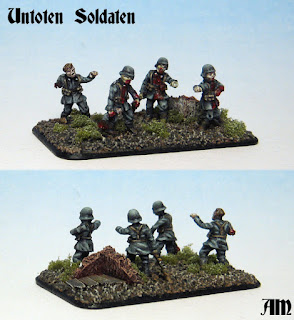 Corporal Bauer huddled inside the ruined bakery, listening for any hint the hideous creatures outside might have detected his presence.  The scratching and moaning continued to come from the street outside however, interspersed with wet sounds he was sure were his dead squadmates being dismembered and consumed.  After a day of heavy fighting, they had been caught by surprise, by what seemed to be a group of their own Waffen-SS... but empty-eyed men soaked with blood and stinking of death, attacking with bare hands and teeth.

A tiny scuffing noise made him look frantically around the debris-strewn room.  In one dark corner, a British soldier crouched, a heavy coating of grime and mud making him almost invisible.  Bauer spasmodically clutched his Mauser, but the Englishman only brought a finger to his lips, and with his other hand, held up a cloth bag bulging with heavy, egg-shaped objects.  Bauer stared for a moment, then glanced down at his own belt, where a single grenade remained...


It took me way too long to do these, but some days I feel like a zombie myself. I think I'll keep them to admire for a while before the go in the mail to my brother...  Anyway, you can check out a much, much more impressive 28mm WW2 zombie project, entitled "Don't Fraternize with Germans" at Anatoli's Game Room.  Amazing!
Posted by Allison M. at 7/18/2012 03:27:00 pm 3 comments: 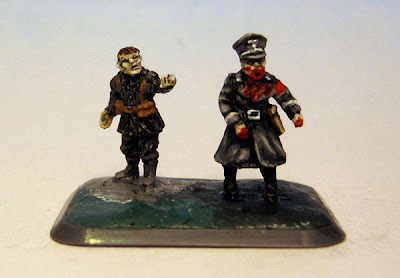 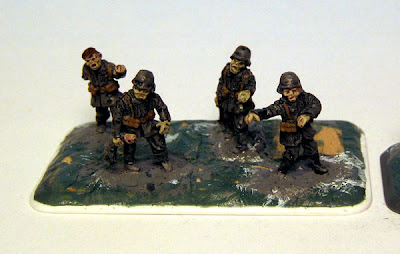 So I guess they're Waffen-SS, for that extra dose of evil :O Finishing the leader (do zombies have leaders?) has definitely helped motivate me to work on the rank and file (all 5 of them, ooh!). So far so good, though I was hoping the uniforms would look "field grey" which is actually more green. Maybe I can fix that with the highlighting.
Posted by Allison M. at 7/08/2012 09:33:00 am 6 comments: 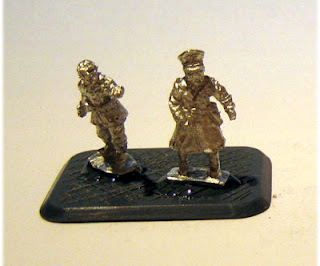 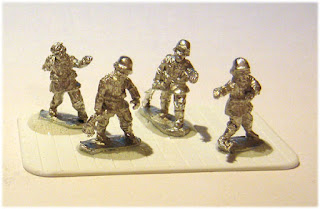 These guys will be a birthday gift for my brother, so if you are reading this M___, I guess you spoiled the surprise! Anyway, $11 got me a good handful of these from Rebel Minis, and they're going to be fun to paint. They're pretty cute little sculpts, I like the guy dragging his rifle and the missing-arm/carrying-an-arm pair (I based those two together).

The gift minis will have dirt-n-bushes bases to match M___'s Flames of War Panzergrenadier army... but if I ever get to paint some for myself, they'll have winter bases... Død Snø style :D 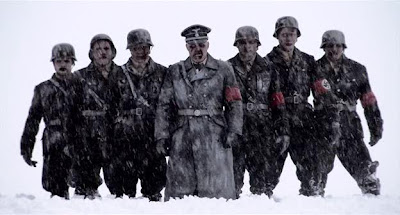