Slave to the Power of Death

Tell me why I had to be a Powerslave
I don't wanna die, I'm a god
Why can't I live on? 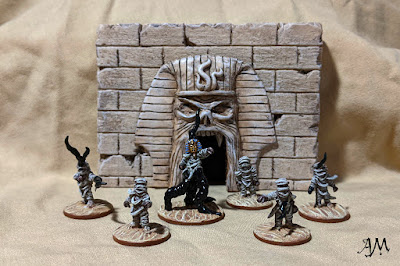 It was said that the pharaoh Ser-Akh-Aten, seeking to escape not only bodily putrefaction but mortal death itself, entered a pact with forces far older and darker than the gods of his people.  He expired, shrieking in an incomprehensible tongue, his body grotesque and contorted, and was hastily mummified and interred under the Elder Sign by his priests, in the hopes his madness would be buried and forgotten.

It was not forgotten, and did not long stay buried... 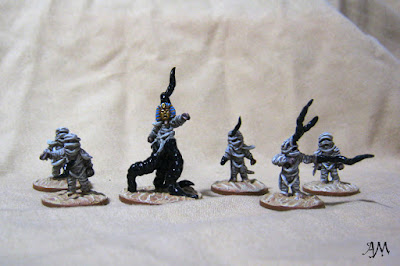 These figures were a kind gift from CP Models.  I made the tomb from Fimo (the face) and insulation foam (the wall).