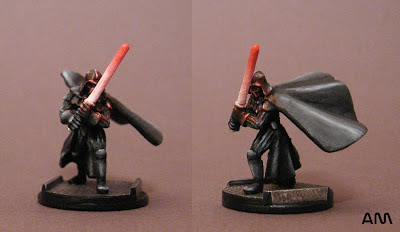 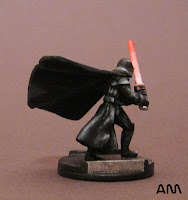 Of course I saved the best for last... and this is such a great figure too!  The sense of aggressive forward motion is really there, with that cape billowing behind him.  Seemingly beyond redemption, he charges into combat cutting his enemies down without mercy.  His powers are impressive, but his main allies are his own hate and anger. 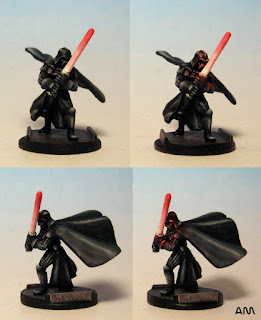 My source lighting on this one is definitely inspired by dis's excellent version of this figure.  I think the figure looked pretty good without it, but that's no excuse to get lazy, now is it? ;)  The base is actually super simple - a piece of an old model kit that has a treadplate texture on it.  I wanted something cool but not so elaborate it distracted from the figure itself.

Certainly there is no hunting like the hunting of man, and those who have hunted armed men long enough and liked it, never really care for anything else thereafter.
- Ernest Hemingway 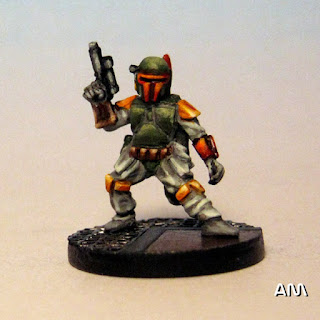 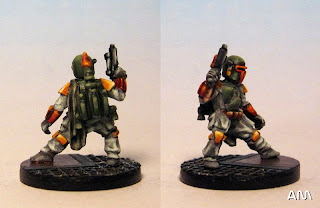 A coolly amoral villain full of menace and mystery (or at least he once was, before we learned all about his childhood and his many adventures in elaborate detail).  There aren't a lot of characters I'm willing to paint twice, in two different scales, let's put it that way ;)

I'm just getting a start on the last two figures from this set - the bad guys! It took me days to get the basing and prep work done, in a parent's typical 5-10 min. leisure increments.  Dremeling the attached bases off was as usual a nerve-wracking exercise!  But they're ready to paint now and I'm really looking forward to it.  These happen to be two of the most dynamically posed figures in this set and really, they're head and shoulders above a lot of 15 mm sculpts in that regard. 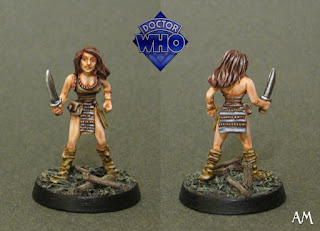 Leela was a warrior of the savage Sevateem, a tribe of regressed humans. She joined the Fourth Doctor on his travels and with him fought for good causes. Although quite clever, she knew little of technology, and was continually amazed by her surroundings and the tasks she faced. Leela never lost her primitive edge, and remained quick to take up arms throughout her time with the Doctor. - Tardis Index File

Yay, another Doctor Who mini, though one that might not mean anything to non-fans.  I like this character because, starting in her debut in the excellent Tom Baker episode "The Face of Evil", she was never satisfied with not understanding something, rejecting magical beliefs and trying to rationally comprehend even the most bizarre things she encountered.  A scientific mind, despite her stone-age origins.  Although attempts to make her a proper Victorian lady failed ("The Talons of Weng-Chiang"), she eventually settled on Gallifrey, home of the Time Lords.

I again used my jungle base technique for this mini, effectively I think.  And it's always nice to have time to do 28 mm minis, they are where I started in this hobby.