Move along, move along... 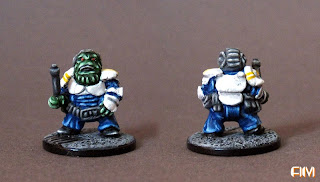 Yet another Eli Arndt sculpt from 15mm.co.uk.  After seeing Spacejacker's nice paint-up here, this was a figure I had to get.  I suspect this version is vaguely inspired by, of all things, the TV show Space Precinct.  It also occurs to me that with his green flesh and rippled chin he resembles a Skrull, albeit a very fat one.  Nerrrrrrd!

I had the same problem with a blobby, indistinct hand weapon that he did, but picked an easier solution: I removed it.  Now my constable has the traditional space-policeman's electro billy club.

The wife took me out to see the new Wolverine film for my birthday.  Without getting into plot too much, this is a solo story about Logan after his self-imposed exile from the X-Men and human society following the death of Jean Grey/Dark Phoenix.

Though it is based on the 80's comic miniseries, what you do not get is this: 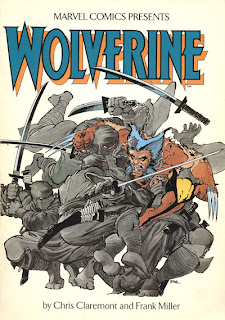 ... as a film.  Most of the same players are there: Mariko Yashida, Yukio, Lord Shingen, ninjas, the wounded bear etc.  But they are changed substantially in their actions, interactions, alliegances and motivations.  Also, there are (spoilers, highlight to read) the atomic bombing of Nagasaki, a toxic/power-stealing mutant, a fight on top of a speeding bullet train, a freakin' giant robot samurai, and Wolverine losing his metal claws... but growing back his organic ones. I rather missed the more pronounced good girl/bad girl contrast between Mariko and Yukio from the comic, it paralleled the two sides of Logan's character. Here the women are as close as sisters (and that's nicely done), and Yukio helps Logan as much out of loyalty to the Yashidas and her best friend as anything else.  And as reviewers seem to have noticed, it can't seem to decide if it's an action drama about a character tormented by his own inner nature... or a summer blockbuster spectacle with the requisite over-the-top special-effects-driven finale.

But I liked it anyway, and if you like Wolverine, you probably will too. 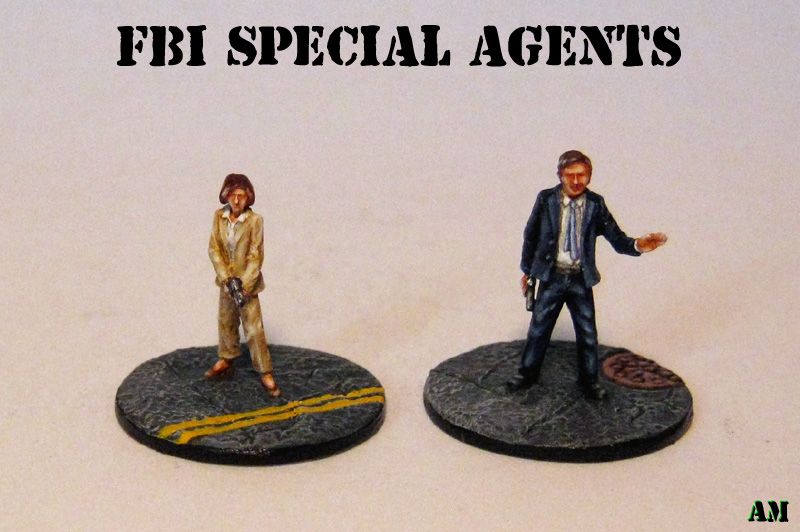 We just got back from a much-needed week's vacation on lovely Manitoulin Island, and so... it's time to post something cool I've been sitting on for a while here.

I was lucky enough to get first crack at painting these new releases from Khurasan.  One agent demands scientific rigor, the other allows himself to explore extreme possibilities.  Together, they're a doggedly unstoppable truth-seeking duo, even if they're always stopped short of actually finding it. 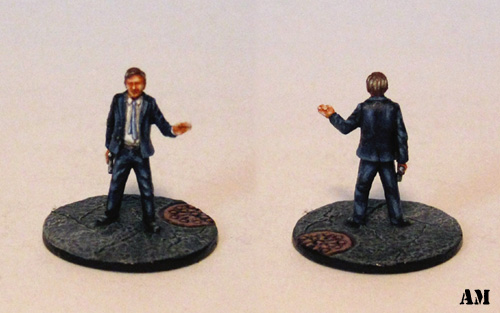 Anyway, on to the sculpts.  Holy crap, so tiny!  These are easily as finely sculpted as "Dave and Desiree", and perfectly proportioned.  There were a few pesky double mold lines that took some care to remove, but overall prep was not bad.  I didn't even try to remove the attached bases, as I was scared that I'd snap them off at the ankles; instead I embedded them in the middle of washer-shaped plastic pieces so the street surfaces didn't bulge up.

Email ThisBlogThis!Share to TwitterShare to FacebookShare to Pinterest
Labels: 15 mm, Khurasan, the truth is out there 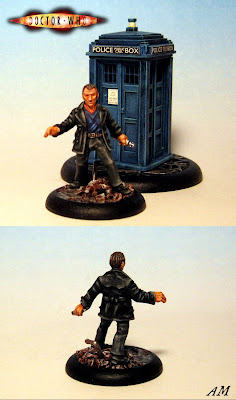 The Doctor: I'm The Doctor, by the way.
Charles Dickens: Doctor? You look more like a navvy.

Finally done!  I'm not 100% happy with some aspects of this guy, but are we ever?  Mostly his skin seems too dark, #9 was actually pretty pale.  And in retrospect, some brown tint on his leather jacket would have looked good.  I thought of adding a tattered British war poster ("Keep Calm and Timey Wimey On"?) to the base but that might clutter it.  Maybe later.  Anyway as I mentioned last post the base is supposed to be vaguely London Blitz, brick rubble and dust.
Posted by Allison M. at 8/07/2013 08:42:00 pm 4 comments: