"The Empire will compensate you if he dies."

"You like to hurt folk."
"Part of the job."
"That's why you TOOK the job."
- River Tam and bounty hunter Jubal Early, "Firefly"

Well, he's done. I think he looks fantastic too, the saturated colours give him a comic book vividness which doesn't really match his appearance in the films, but works well on this scale. The figure is kind of small (for a miniature, even) so this helps to make the details more distinct as well.

Gift for my Pop 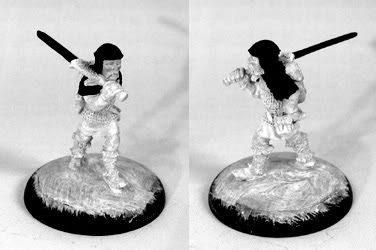 This is a belated birthday gift for my father. I imagine this fellow being a warrior who has just decided that he doesn't want to fight on the battlefield anymore, and is heading back to his family instead. It's a crisp, characterful sculpt, available from Discount Hobby for a whopping $1. Dad always taught me to be frugal :)
Posted by Allison M. at 1/25/2007 08:00:00 pm No comments:

Email ThisBlogThis!Share to TwitterShare to FacebookShare to Pinterest
Labels: gifts 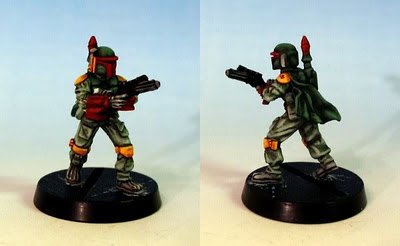 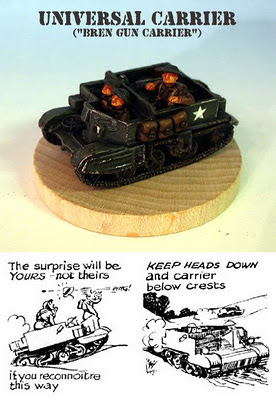 Just another WW2 mini, Allied this time. Not an amazing paint job, I'll admit. Though this is meant to be a British or Canadian vehicle, the "American" white star was a common Allied air-recognition marking, used to reduce friendly* aircraft attacks on ground vehicles. The cartoon is presumably from a training manual, this was NOT a "tank" by any means and using it as such probably got a few soldiers killed.