Got some painting time, yay... 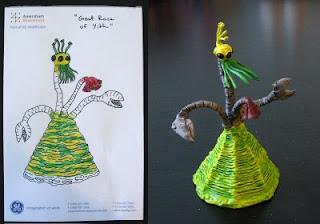 I decided to go with a mostly yellow-green scheme for the Yithian. Lovecraft describes the body cone as "iridescent", and I was tempted to buy some sort of iridescent paint, but that would have probably looked like a My Little Pony version of the bizarre alien. DO NOT WANT.
Posted by Allison M. at 3/31/2009 07:30:00 am 4 comments:

Email ThisBlogThis!Share to TwitterShare to FacebookShare to Pinterest
Labels: Lovecraft

A shadow out of time 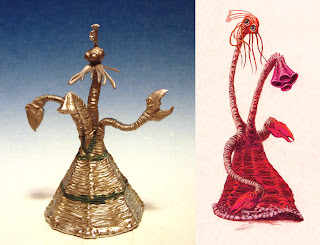 Their actions, though harmless, horrified me even more than their appearance - for it is not wholesome to watch monstrous objects doing what one had known only human beings to do. These objects moved intelligently about the great rooms, getting books from the shelves and taking them to the great tables, or vice versa, and sometimes writing diligently with a peculiar rod gripped in the greenish head tentacles. The huge nippers were used in carrying books and in conversation-speech consisting of a kind of clicking and scraping. - H.P. Lovecraft, "The Shadow Out of Time"

The "Great Race" of Yith explore the universe by swapping minds with other creatures existing in the future. The Yithian visits the future world inside the (unwilling) donor's body, while the donor's mind resides safely in the Yithian's body, a billion years in Earth's past. They are free to explore and travel there, but their memories of Yith are largely erased before their eventual return to their own time. The Yithians are locked in perpetual war with the Flying Polyps, eventually leading to the destruction of their civilization.
Posted by Allison M. at 3/17/2009 08:39:00 pm 3 comments:

Email ThisBlogThis!Share to TwitterShare to FacebookShare to Pinterest
Labels: Lovecraft

Could be titled "The Goose Thieves" :)

Hopefully there'll be more updates coming in the next while, and some non-WW2 minis, since I know it's sort of a weird kick to be on :) In the meantime, here's a canvas: 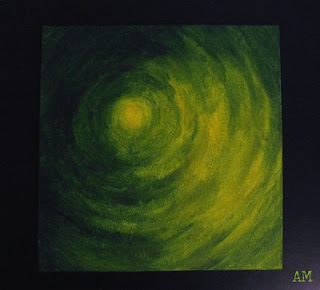