I got a start on my second Space Bunny Arts figure today... the roguish "Sola Haru".  Another crisp, characterful sculpt from SBA, but initially I was puzzled by her fairly generic handguns.  Plain boxy bodies, round barrels; oddly not up to the standard of the rest of the sculpt...?

And then I realized... they're that way for a reason.  You're supposed to do things to them.  And so I chose the obvious route, making them look as much like a certain space smuggler's iconic pistol as possible.  Some fussy work, and bits from my trusty 1:700 Soviet navy spare parts sprue, and voila: 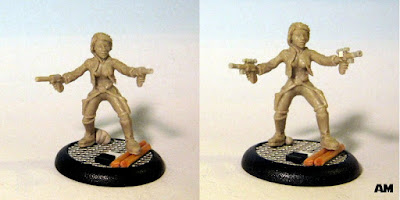 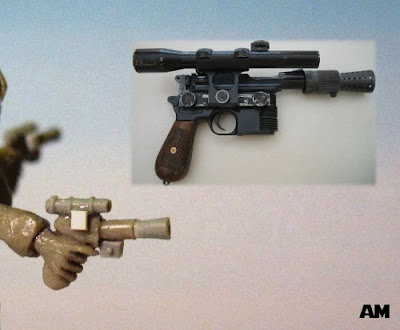 Obviously, you could easily go a different route.  Perhaps something more Western-inspired, or stubby and ugly-looking.  Sometimes with an off-the-shelf figure, "less is more"...
Posted by Allison M. at 7/12/2017 08:30:00 pm 8 comments: 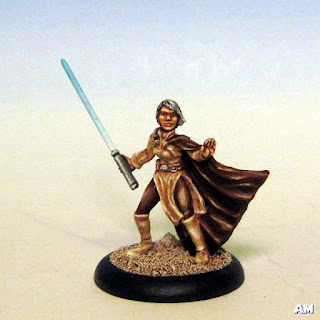 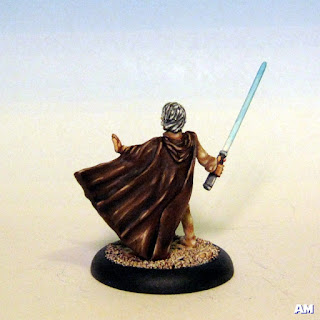 So I finally got my first Space Bunny Arts figure painted!  I interpreted her as an older woman, who's spent years hiding in a remote desert from... something.  Possibly an evil galactic empire.  This is a lovely sculpt: well-posed, with cleanly rendered features and amazing fabric drapery.  A lot of fun to paint. 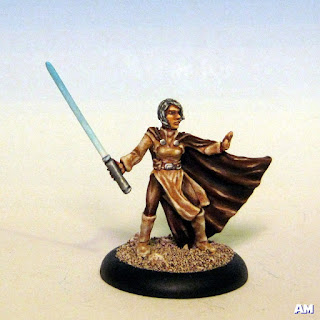 I feel like this paint job is similar to, and owes a lot to, Matt Sullivan's excellently-painted Imperial Assault figures... but it's hard to say how.  I have spent a lot of time admiring his work.  Anyway, I think this figure would fit in really well with that line.