Like most spacefaring species, the Chuhuac have a strong interest in exercising sovereignty over their home space; this includes aggressively suppressing elements such as pirates and smugglers.  Crew and troops on the corvettes Wingfinger, Talon, and Far-Seer are experienced in intercepting and boarding criminal vessels. 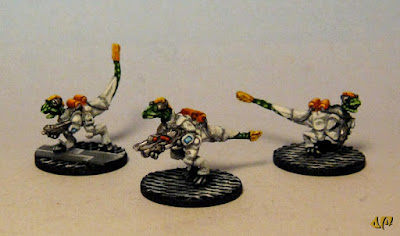 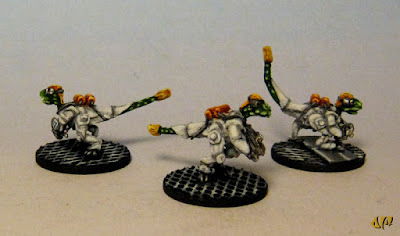 Another trio of Loud Ninja Games' fun space dinos here.  I used the "Chuhuac Troopers" pack from 15mm.co.uk for my ground forces in the previous post, these are "Chuhuac Special Forces".  Giving them a higher-tech space-suited look completely changes the feel; I definitely like how these turned out. 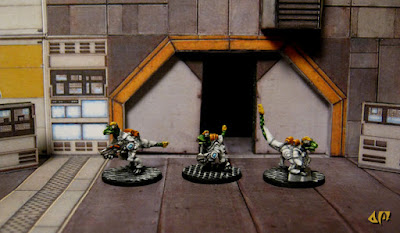 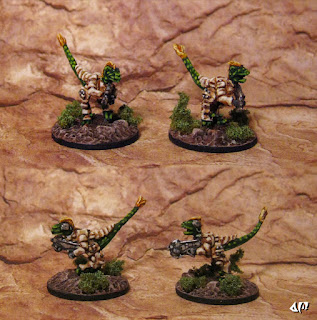 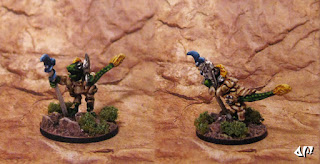 A boisterous race of social carnivores who appreciate a good hunt or aggressive play more than anything, the Chuhuac had long been troubled by the suspicion that something was amiss with their origins.  Only once they developed the paleontological sciences were they able to confirm what several major religions had long argued - that while their species had inhabited their lushly biological world for eons, they did not originate there.  Their fossil record began abruptly about 65 million years ago, preceded by faint traces of a previous, unrelated early ecosystem.

Though first contact between humans and the Chuhuac was initially distrustful, it was still existentially stunning for both species to discover blood relatives across the vastness of space.  As relations improved, both species' scientists eagerly began to work together to learn how an entire ecosystem descended from Cretaceous fauna and flora came to exist on a world dozens of light-years away from Earth. 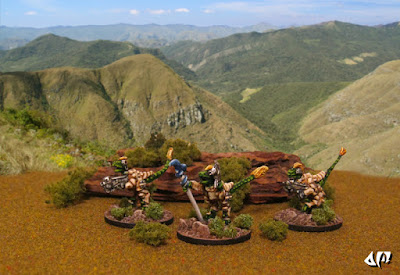 Although individually aggressive by nature, historical interludes of catastrophic internecine conflict have left the Chuhuac with a distaste for actual warfare.  Their military forces, like this pack leader and his troopers, exist largely for self-defense and to assist allies in ventures deemed ethically justifiable.
Posted by Allison M. at 10/05/2015 10:07:00 pm 8 comments: