These exchanges are always a lot of fun, and I painted up TWO figures from the last one, which is a new personal best.

Received today from "Tarreknoire" in the UK: 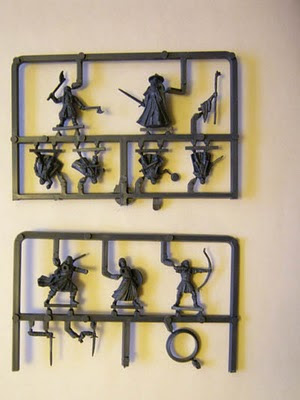 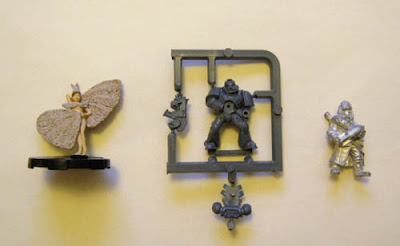 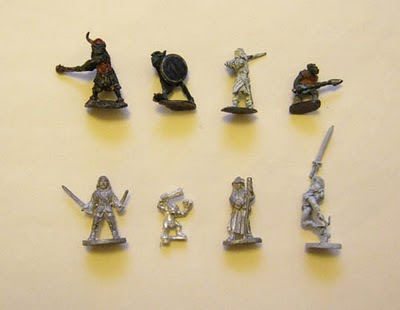 Sent to "bsop" in New York: 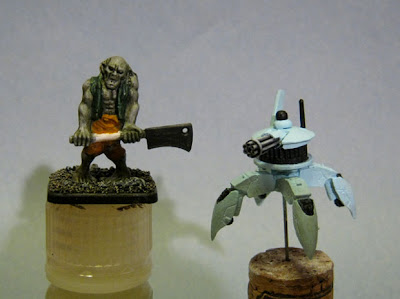 Despite my wife getting sick this week... followed by me getting sick :( I actually managed to get some painting done. Not much, but I worked a bit on my gunbot and started another HQ mini. So, a clean and tidy guy, and a grungy one.

The robot's blue is just GW "Hawk Turquoise" diluted with a lot of white. It's exactly what I was looking for :) It's hard to see but I added some small wheels stowed on the inside of his legs, similar to Tachikomas...

No crown for Victoria

Well, The Chick Challenge verdicts are in , alas my Queen Victoria didn't win anything. But I pretty much knew that as soon as I saw the other entries. It is rather gratifying that neither of the best of show winners were "topless barbarian swordswoman" type subjects, although to be fair that genre was less represented in the contest than it tend to be in the hobby overall...
Posted by Allison M. at 1/26/2011 06:52:00 pm 1 comment: 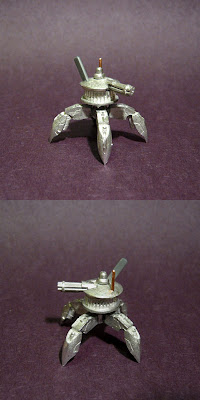 A Reaper Chronoscope "CSD Mk1". I don't have a great track record with this type of miniature. Anything robotic, and anything anime-like are often... not finished by me. I never even completed my "Appleseed" minis, despite them being such an amazing find, and from an anime I really enjoyed.

I've added some antennas to this thing to make it a little more interesting, though I doubt it'll ever be Tachikoma-cute. But it will be light blue, because research indicates the colour blue lulls intruders into a false sense of security.

Also... I located where Agis got the base figure for his amazing 15 mm Captain America:

Email ThisBlogThis!Share to TwitterShare to FacebookShare to Pinterest
Labels: Sci-fi

By the power of Greyskull... 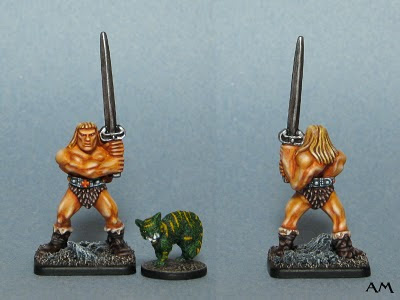 Ok, so he's not exactly as exciting as "Skeletor", as I've said the villain usually gets the coolest outfit :) But I am pleased with the way the skin turned out, which is good considering how little he's wearing. The only real modification I did is the belt design, which I tried to make similar in style to He-Man's chest plate (while not clashing with the rest of the figure). Since I was messing with greenstuff after I started painting, I didn't try to make it too elaborate.

As you can see I gave him a companion; maybe a little small, but perhaps Battle Cat is young in this photo :) The cat is from Mega Miniatures. 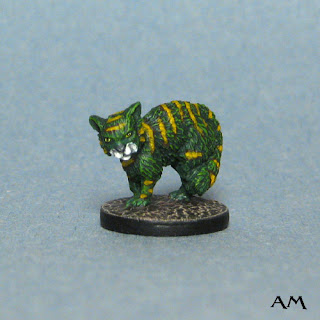 I'll probably try to paint up a few more of these HeroQuest figures in the coming months: Chaos Warriors, orcs/goblins, maybe a zombie (But not the Fimir because, frankly, they're lousy minis even by HQ standards).
Posted by Allison M. at 1/13/2011 07:19:00 am 7 comments:

Works in progress - barbarian and tank 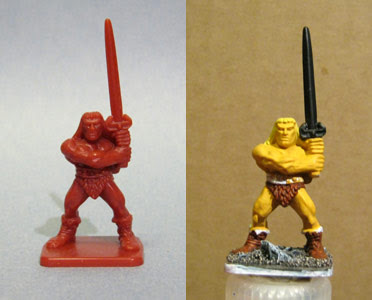 Of course, I'm painting him up to go with "Skeletor", but I don't think he'll be as engaging. The villain is so often cooler than the hero... (also this figure is not nearly as interesting a sculpt, nor does his pose work as well with the plastic casting). But that's no reason not to paint him! 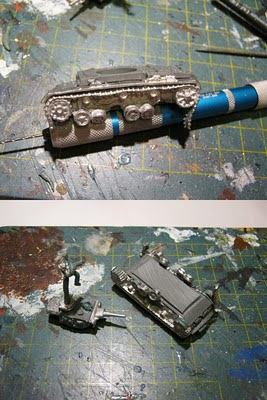 A bit of work on my "possessed" Panzer III. Cutting the tracks up (with the world's #$^@ing dullest razor saw) to make room for the emerging tentacles was a pretty ghastly chore, especially since I wanted to save some of the road wheels and leave some track remaining to dangle convincingly at the ends. But I think once it's done it'll look okay, and I can just plaster some demonic goo over any rough spots ;)
Posted by Allison M. at 1/04/2011 07:20:00 am 4 comments: