They say he was there at the beginning.  One of the originals; witnessed the birth of the Imperium.  But that's impossible... he's just a man, a lowly spacer.  Still, the glitchy old holos don't lie; there he is. 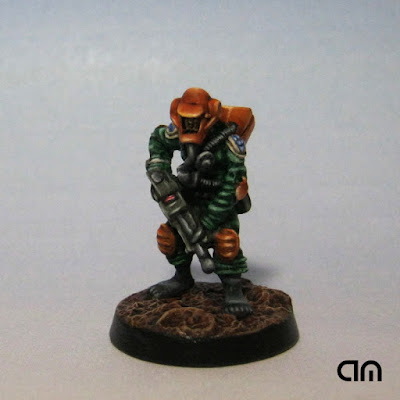 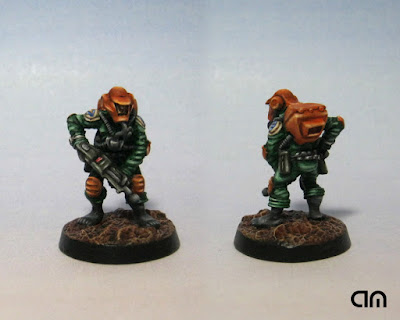 This figure is easily one of the most vintage models I own.  First appearing in 1987, the sculpt dates all the way back to the early days of Citadel Miniatures' "Rogue Trader", when there was a lot less rigid backstory or structure to their catalog.  Later, the Rogue Trader universe became the skull-piled Warhammer 40,000 we all know and (problematically) love, and street-level characters like Abbadon, Plunderino Pete, and Irn-Bonce the Squat are now a thing of the past...

It's an odd sculpt, hunched and bandy-legged with a very vague helmeted face that's almost skeletal.  But I like it, it has a grimy working-class-in-space appeal.

I picked this model up years ago, and a recent post by Matt S. of Oldenhammer in Toronto spurred me to paint it up.  I love his bold, lively painter's hand, and I think this paint job is definitely influenced by it.  I tried not to mimic his version of the figure, but the shoulder patches are identical as a small homage.

(Abbadon's name was of course recycled for a much different, more skull-licious 40k character later on) 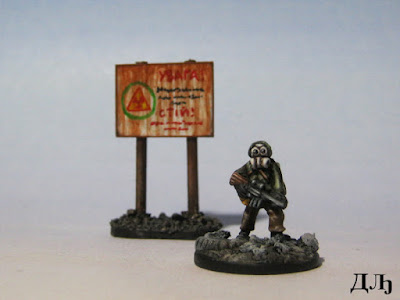 To enter the Chernobyl Incident Exclusion Zone is forbidden.  But some do it anyway, out of curiosity, desire for adventure, or to scavenge any remaining valuables.  It's certainly a risky venture however; while radiation levels are now low enough that exposure doesn't mean certain death, there are other, more immediate perils lurking within... 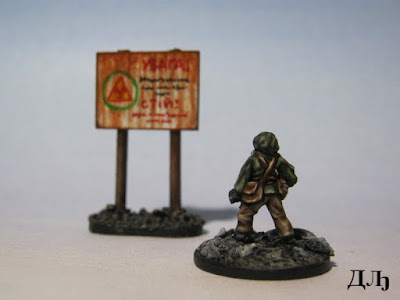 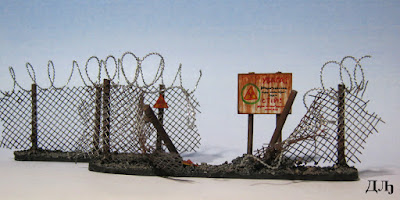 This is an Alternative Armies figure with a bit of detail added to the rifle and gasmask (giving it an oddly spider-like appearance).  The fences and sign are scratchbuilt, with model barbed wire.

Note: this figure and terrain are inspired by fiction like the PC game "S.T.A.L.K.E.R.", depicting the Exclusion Zone as a bleak, sinister, apocalyptic landscape full of savage, mutated horrors.  While this is a cool fantasy, the real Zone is actually what many areas abandoned by humans rapidly become: a safe haven for wildlife and flora to flourish without disruption: 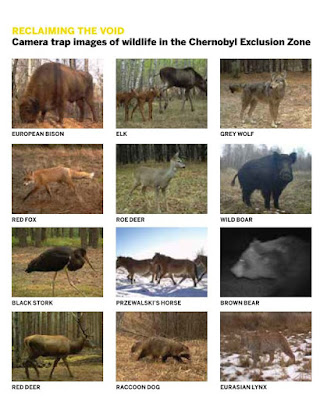 The Exclusion Zone can even be visited safely, without automatic weapons and creepy, grotty Soviet-surplus gasmasks, via professional guided tours that visit highlights like abandoned schools, parks, and even the plant itself.

Solan paced the perimeter of the summoning circle, uttering the words of power that would draw forth an entity from the planes beyond ours.  One mistake and the spell would fail, or worse, the spirit would escape, free to perform whatever mischief it chose on our world... and the spellcaster who sought to bind it.  Solan's protective wards and potions were formulated with this in mind... 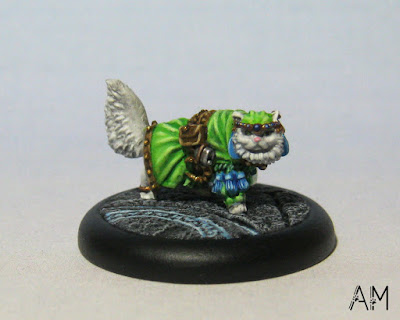 I had a hard time deciding which of my Cats & Catacombs figures to paint after my monk and fighter pair... but since I tend to have a shortage of magic-users in my display case, this guy was a great choice!  He has a distinctive pacing, slightly curved posture, which fits perfectly with a summoning circle on his base to give him a bit of a story. 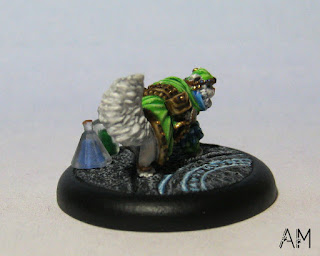 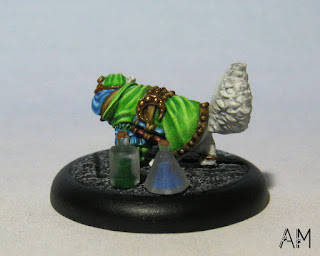 Removing this little guy from his attached base was a very good idea; I don't know if you could even paint his belly completely without doing it.

The bottles are from the same WizKids Deep Cuts purchase as the lighted cauldron I posted earlier (though these are from the wizard's accessories).  I drilled them out and painted the inside surfaces to make them look filled with liquid; the plastic's a bit soft and oddly hard to drill cleanly. But the result works, I think.