Is there Life on Mars

Oh why, oh, why should love ever come
To couples, like you and me
Whose cold, cold wars are never done 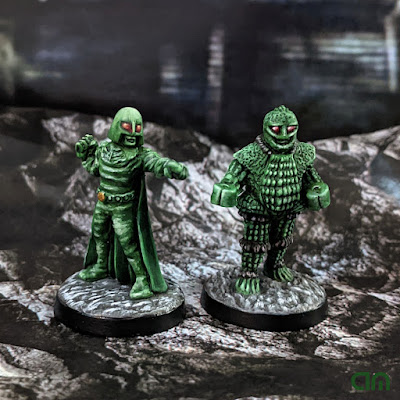 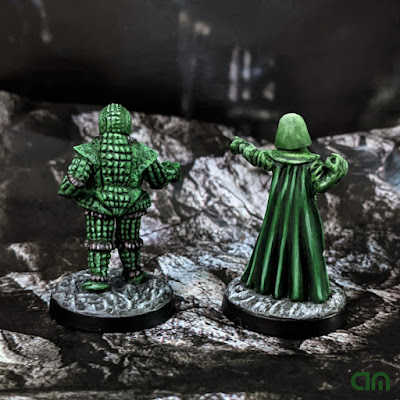 The Martian "Ice Warriors" were second tier villains in Doctor Who starting with the Second Doctor.  Their first appearance was in a serial where Earth scientists thawed them from beneath glacier ice and they sought to conquer the planet.

I first saw them in the 1972 Third Doctor serial "The Curse of Peladon", which these figures are inspired by.  Alien delegates (quickly joined by the Doctor and his companion Jo Grant) are meeting on the planet Peladon to decide whether to admit it to the Galactic Federation.  When the Peladon High Priest uses a hidden monster to attack the delegates and prevent the admittance, the Doctor and his companion are suspected of murder.  But the Martian delegate Lord Izlyr defends them, telling the Doctor that his people have embraced peace.  Along with his underling Ssorg, he helps the Doctor reveal the murderous plot. 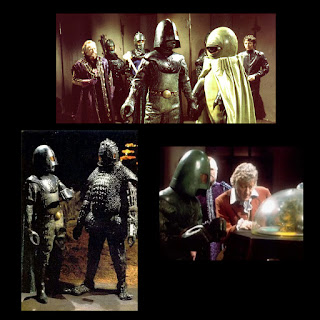 These figures, from Black Tree Design, sat half-painted in my lead pile for a good fifteen years until I decided to finish them off last weekend.  As they say, it's never too late to do the right thing 😄

Email ThisBlogThis!Share to TwitterShare to FacebookShare to Pinterest
Labels: Doctor Who, Sci-fi