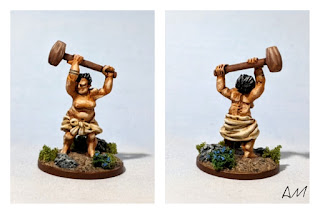 Who is this beefy brawler waving an enormous mallet?  An ex-Sumo seeking his fortune?  A sinister thug seeking to brutalize and rob?  His double-line arm tattoo marks him as a two-time convict under the penal system of the Edo period, but men run afoul of the law in so many ways... 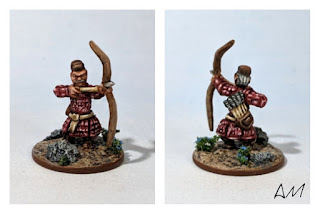 Masterless samurai whose daimyos had died or discharged them, ronin roamed the country, offering their services to lords as mercenaries or guards.  Some engaged in banditry or other less-than-honorable trade as well.  This ronin still has his armour, but lacks the traditional samurai's pair of swords, either through choice or the desperate necessity of selling them...

Both these miniatures are from Alternative Armies' "Sengoku" line of Japanese fantasy figures.