Shock to the System

It was a night
Hell of a night, L.A., it really was
Oh what a riot
I said yeah, come on
It makes my life feel real
Fear police and civil corruption oh yeah
Is there a man who would be king
And the world stood still 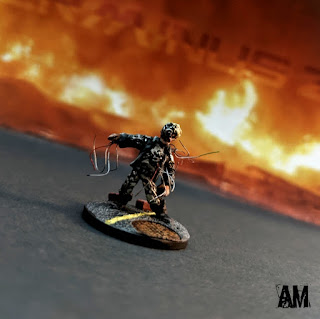 In 1993 Billy Idol released his fifth album, "Cyberpunk".  Its questionable musical merits and cultural impact aside, it gave us the absolutely bomber song "Shock to the System"... and its slightly cheesy but enjoyable video. 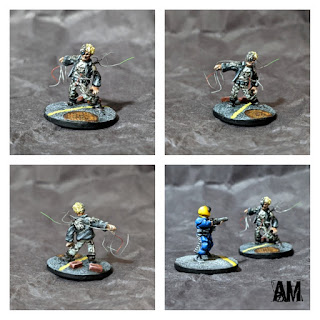 The video's loose storyline is of a civil riot of some kind.  A lone camcorder-wielding man witnesses a group of police beating somebody. When they discover that he's seen them, they badly beat him in turn.  The smashed fragments of his camcorder incorporate themselves into his battered body to produce a lurching technological monstrosity with an enormous camera protruding from one eye socket. Totally not a metaphor for anything...

This conversion is based on a Khurasan zombie.