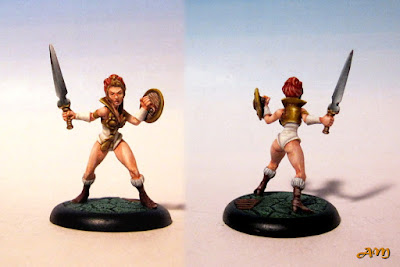 The brave and loyal but sometimes headstrong Teela is the Captain of the Eternian Royal Guard.  The adopted daughter of Duncan, the Man-At-Arms, she is in fact the secret child of Teela-Na, the Sorceress of Castle Greyskull. 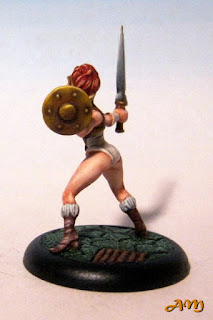 This Quest Miniatures figure really captures the cheesy 1980's-ness of the character, charging into battle in her up-do, white swimsuit and high heels.  As one does.  The shield that came with her was quite large, which I remedied by making a copy using Instant Mold and replicating only the central boss with greenstuff, to give her a buckler more suitable for a lightly-armored warrior.