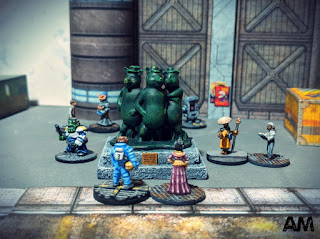 "The company put that statue up, you know.  Paragon Exoplanetary, the ones who had this world terraformed.  It's dangerous business, terraforming; hard to get workers willing to travel light-years just to scrape by on a toxic planet for decades.  They came up with the idea of making workers.  Genetically engineered pigs, with enhanced intelligence and opposable thumbs!   Picture that, eh?  Pigs, man!  Anyway, the pigs did the terraforming, god knows what they told them would happen after.  But just as this place became inhabitable... boom!  A mysterious disease.  They all died within weeks, just before they would have gained full First Settlers' rights here!  Way too convenient, if you ask me.  And then they built a god damn memorial to their 'selfless sacrifice'..." 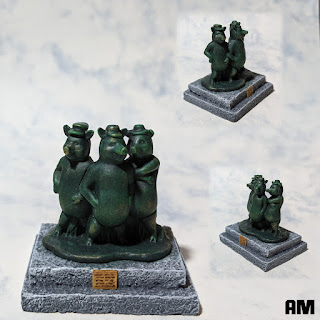 These pigs were a Kinder Surprise toy that floated through the house for a while before I came up with the germ of this idea.  Then yesterday I felt the need for a quick, easy project so I finally did it!  Those poor pigs... never trust the company.