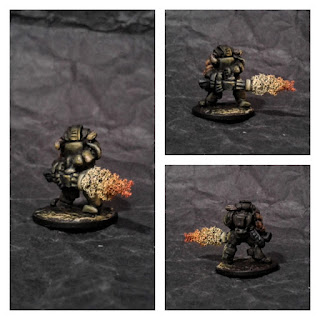 This was a fun one-day project I did last week on a day off work.  The figure is an Alternative Armies "Star Viking" I've had for a while but was never inspired by before.  I just saw it in the pile, and the idea to paint it up with a gun blast effect and OSL just came to me.  The result, I think, is actually pretty badass. 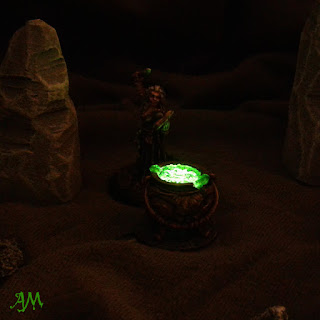 I picked up a couple of WizKids Deep Cuts sets recently: "Witch's Den" and "Wizard's Room".  so now I have a fun assemblage of arcane dungeon dressing that I'll probably use to embellish bases or set up some fun photos.  The coolest item was a cauldron with a clear insert for the "potion" inside!  So I did the obvious :) 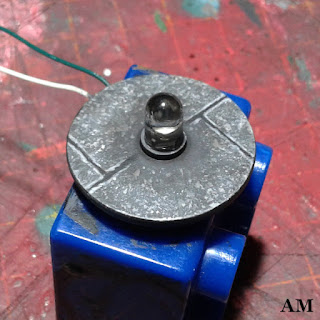 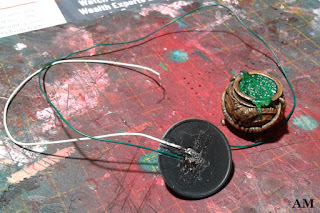 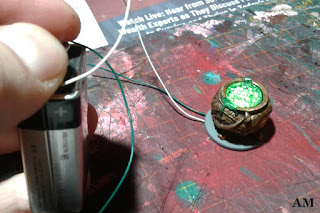 This was actually pretty easy, just a bit of drilling and positioning to get the LED snug inside.  The hardest part was fitting the wires under the very thin base I used.  I'd suggest a regular 30mm base if you want to make something like this.

"Give me your tired, your poor,
Your huddled masses yearning to breathe free,
The wretched refuse of your teeming shore.
Send these, the homeless, tempest-tost to me,
I lift my lamp beside the golden door!" 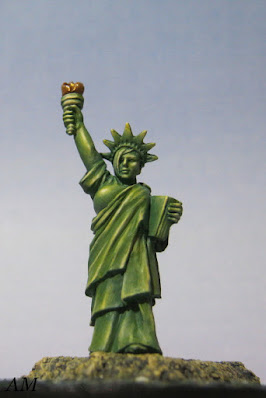 I've had this great little Hasslefree Miniatures model for ages, I probably got it in a mini exchange back when I was a regular on Cool Mini or not.  It's not a perfect replica of the actual Statue of Liberty, rather it's one of a range of figures modeled after the proprietor Kev's wife.
Anyway, for some reason I felt like now was the time to paint it up.  I wanted something a bit more dramatic than "statue on pedestal", so I tried some heavy directional lighting here, as if the statue is facing dawn over the water, complete with an unlit back and a shadow cast behind it.  I'm not super happy with how the "light" looks on the rocks or water, but the statue itself has a good warm glow that I'm satisfied with. 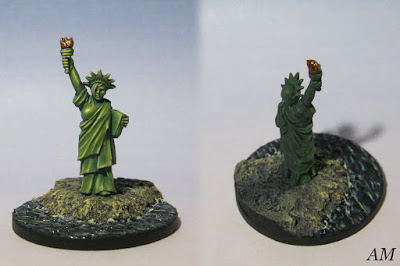 The "rocks" are obviously just cork, and the waves are haphazardly sculpted from clear acrylic gel medium. 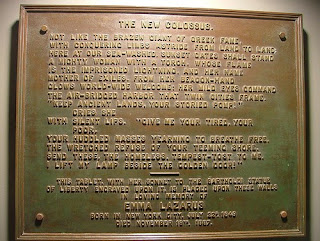 Having unsuccessfully searched the castle library for the necromancer's grimoire or any useful magical items, Sonya and Han were taking a moment to plan their next move when suddenly, the heavy oaken door began to creak open... 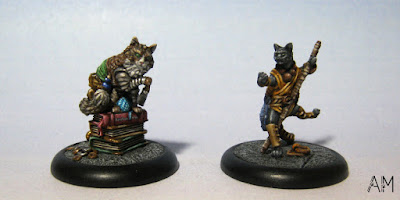 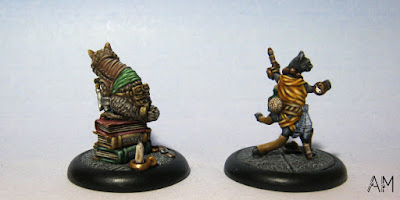 A few months ago I snagged a small pack of these amazing Cats and Catacombs figures at my FLGS.  They're AMAZING!  I love cats so really, anything cat-related is a pretty easy sell, but cat versions of D&D characters?  As the meme says, "shut up and take my money".

I had previously painted some "Dungeons and Doggies" figures for a friend, and they went very well, but I felt that I should have done something with the attached bases.  So for these, I snipped the bases off and based them properly, with a bit of dungeon or castle flavour, adding stone floors and the coins and candle (unlit, to spare Sonya's fluffy tail!) beside the stack of books. 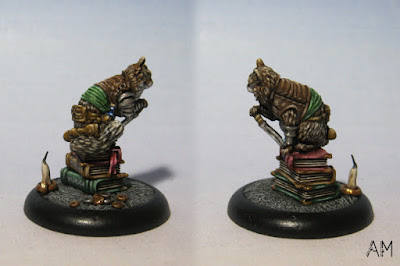 I'm particularly proud of the fish snack hanging from the monk's belt: 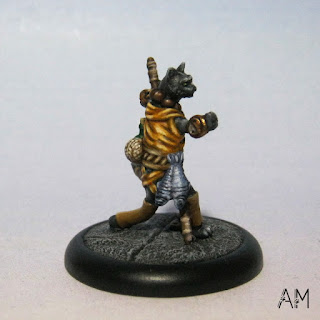 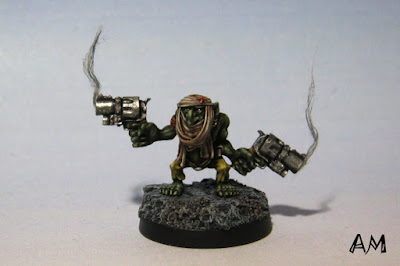 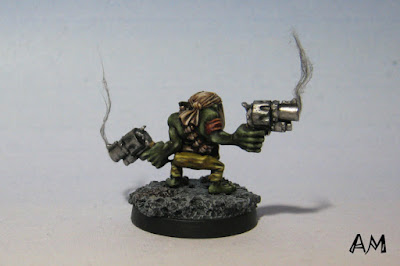 I grabbed this figure out of the depths of my lead pile as an entry in the popular "Orc-tober challenge" on Instagram, started by Old Man Paints.  I don't expect to win, and I'm not even sure what the prizes are, but it was a fun exercise.  I don't usually do greenskins at all, and it was a chance to stretch my style a bit and do another "dark style" figure... without it being largely black like my Plague Doctor.  I also follow Grave Wraith Terrain on Instagram and love his unique style - grim and dark without being monochromatic.  I didn't go quite that far this time... but I should try it.

The mini itself is apparently a Gorkamorka grot from c. 1999, which doesn't seem that "Oldhammer" to me... but it's as old as many of my coworkers, so I think it qualifies :)  I added the gunsmoke as an impulse at the last minute, and was convinced I'd wrecked it, but it turned out greasy and wispy which really suits him. 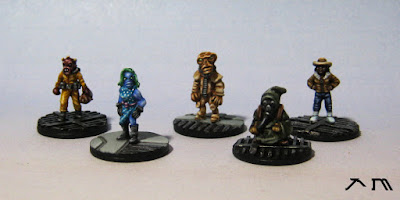 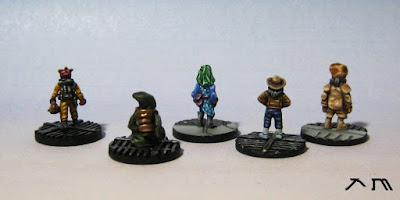 Sure, the swashbuckling space smugglers, adventurers, alien death bots, and heavily armored troopers get all the glory... but somebody has to live in the universe of the shiny spacey future.  Those somebodies are all the workers, merchants, spacers and countless other "little people".  And they deserve their own figures :)

I had a lot of fun with these; I think they turned out as real little characters, all unique.  The minis are from CP models and Ground Zero Games, with a few light conversions. 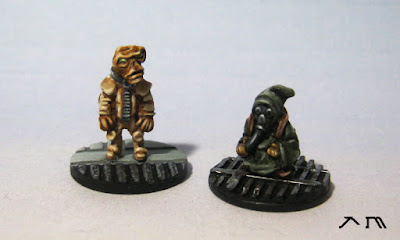 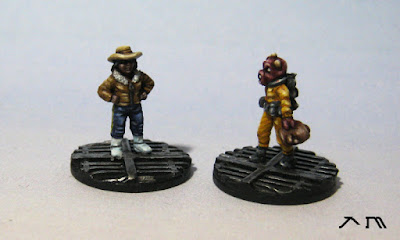 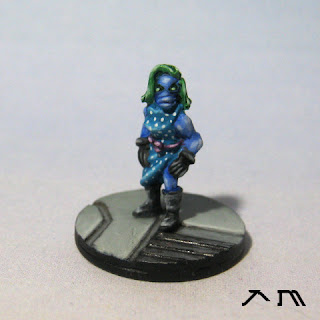 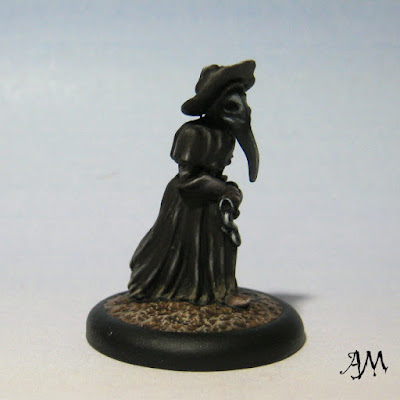 Ah, the classic medieval plague doctor.  Robed and masked to prevent infection, he might show up at your bedside to poke your armpits with a long stick and inevitably deliver tragic news to your loved ones.  Or he might... roam around the muddy streets with a skull on a chain, just being generally creepy.  Since they hadn't invented golf yet. 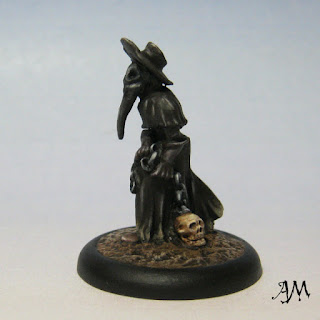 I actually love this figure, despite its odd choice of accessories.  The original CP Models figure had a ball and chain, but I felt that was pretty non sequitur, so I sculpted a (somewhat lantern-jawed) skull over it to provide a visual focus on what I'd already planned to be a very dark-coloured character. 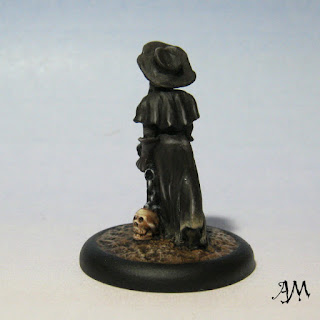 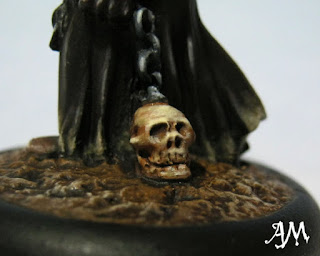 I mixed a very brownish black for his robes, and a straight black for his mask; a subtle difference that's supposed to indicate the difference between fabric and leather, but is of course completely invisible in these photos.  Oh well... 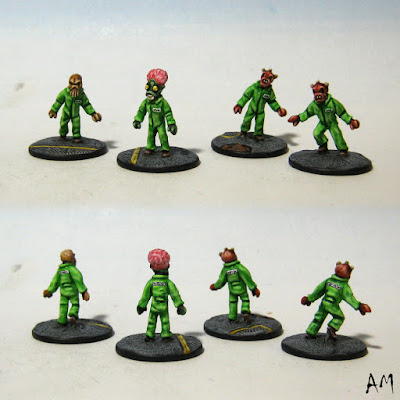 Technology and culture may evolve but apparently throwing society's rule breakers into confinement always stays in fashion... this group of non-human convicts might be petty hustlers, violent career criminals, or even hapless political prisoners of a despotic regime. Their heavily-armed guards march them around, tolerating no disobedience or attempts to escape. 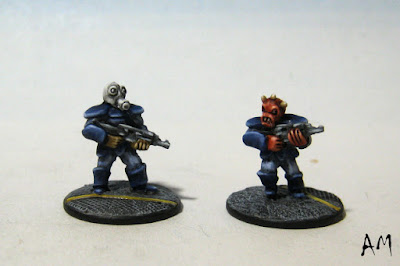 I think these two CP Models sets (boiler-suited aliens and guards) that come with a choice of heads are such a great idea.  Depending on the head used, the characters really turn out feeling very different, especially the guards who could be anything from simple gas-masked near-future humans to genetically-engineered apes or very weird aliens!  The "boiler suits" can easily be spacers' jumpsuits, uniforms, or as here, prison garb.

He-Man and the Masters of the Universe 28 mm I'm the master of the world I have no fear of man or beast Born inside the soul of the... 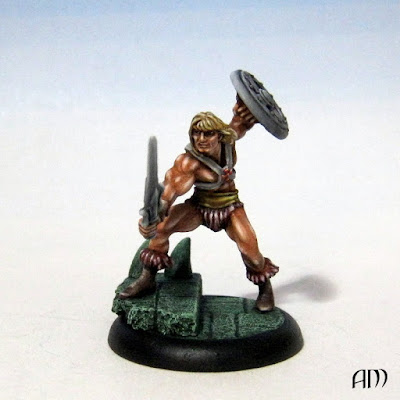